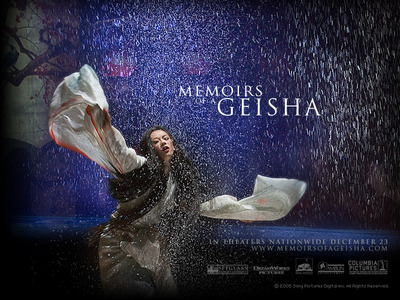 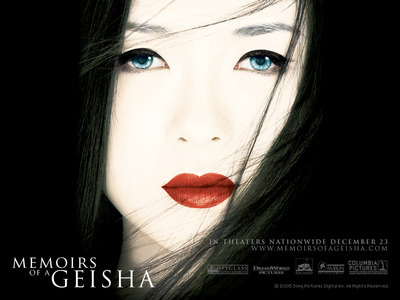 Saturday afternoon, with nothing planned to do, what other way is better than killing time in a movie theater? Originally Homer wanted to watch King Kong while I wanted to watch Brokeback Mountain. We finally agreed on our third choice–Memoirs of a Geisha.

I’ve been thinking about watching this movie for some times now. I read the book, liked it very much, and I’m really curious how the movie would turn out. But I also heard mixed reviews about this movie. Some people didn’t like the fact that they used majority Chinese casts to play Japanese geishas. Some also criticized the director didn’t follow the geisha culture truthfully. This movie “Americanized” the story, that it’s a typical Hollywood Cinderella movie. Do I really want to spend $7.50 to watch this movie?

My thoughts after watching the movie…I think I would give it a B or B- rating. It’s not a bad movie overall. The cinematography was breath-taking, a very typical Rob Marshall movie. He used a lot of colors to set the moods in the movie. The Oriental background music matches the scenery perfectly. But I felt this movie is merely narrating a story. It jumps from story to story without digging much in depth with the character’s inner development. I wish they could’ve dealt more about Sayuri’s inner struggles, from being sold to the geisha house by her own father, to being treated badly by Hatsumomo, and years of hardship to finally be with the man she fell in love with at 9-year-old.

Movies are subjective. Some people may disagree with my views above. I’m not disappointed after watching Geisha. I just felt they could’ve done a better job~