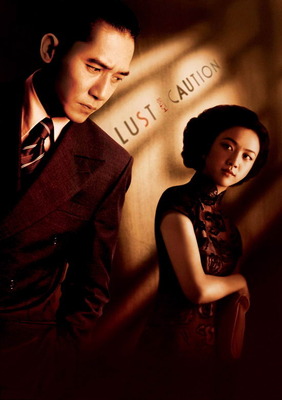 After hearing all the buzz about this recent Ang Lee’s move, “Lust, Cautious”, I finally went to watch it last night with Heather. After watching the film, it is just like my friend had said: a very “thought-provoking” movie.

“Lust, Cautious” was adapted from a short story written by famous Chinese writer Eileen Chang. The story depicts about World War II Japanese occupied Chinese societies in the 1930s. A group of patriotic students carried out an assasination plan to kill a top Japanese collaborator, Mr. Yee (played by Tony Leung). A young naive college girl, Wang Jiazhi (played by Tang Wei) played a rich wife Mrs. Mak to get close to Mrs. Yee (played by Joan Chen), then seduce Mr. Yee into an affair. They failed the first time around. After 3 years, Wang ran into the student leader Kuant Yuming (played by Taiwanese pop idol Leehom Wang). Kuang had joined a rebel organization and convinced her to picked up her old role as Mrs. Mak again. This time, Wang successfully seduced Mr. Yee into her bed. However, as the two drawn closer together, Wang found herself pushed to the limit under intense psychological pressure and facing an ending that leads to nowhere.

The pace of the entire movie is pretty slow. There isn’t too many dialogues. As a typical Ang Lee’s movie, the details tells the story. You can tell the characters’ emotions and struggles just by observing their moves and looks. Tony Leung is superb as usual in this movie. He portrayed a character that is very different from his past roles. Mr. Yee is someone who’s very dark and dangerous. Tony Leung gave a convincing performance with his character.

The leading lady is probably the key role that connects the entire plot in this movie. As a newbie actress, Tang Wei gave a Oscar worthy performance. She has a classy innocent look that convince people when she played a young innocent college girl. But she also has a seductive look that transformed herself into a beautiful seductress. Throughout the movie, Tang did not have too many facial expression, but the way she looks at people and her body language shows enough of her inner pain and struggles.

As for the famous sex scenes, I thought those scenes look very real. I wonder if they were really doing it. Those actors are really admirable. They both sacrificed a lot for this movie. Sex scenes in this movie are major scenes that connects the story together. Both of the actors portrayed their love-and-hate feelings and their dark dangerous sides vividly through their interconnected limbs. After watching these scenes, you won’t feel aroused, but would actually feel tensed and unable to breath.

“Lust, Cautious” is definitely a remarakble film. It’s not going to be a popular movie filled with lots of action. But it would be a film that would be discussed for many years to come.