The weather has turned pretty cold lately. This is the perfect time for hot pot or shabu shabu. However, most of the good shabu shabu places are kinda far from us, like Little Tokyo. Since we didn’t want to be stuck in the Friday night traffic, we decided to look for somewhere closer to us.

We found this Shabu Shabu Ya restaurant on La Brea online. They had some good and bad critics. But since we didn’t really want to drive too far away, we decided to go check it out.

Most people know that La Brea area is kinda ghetto. Why would they open a Japanese shabu shabu place over there?

We got to the restaurant around 7 pm. There was only another table of customers in the restaurant. It was exactly like what the people said online: “an empty restaurant”. That was a dangerous sign. If a resistant is empty on a weekend night, that usually means their food isn’t that great. We were pretty curious how they could survive in this area with such a spacious store front without too many customers.

They did not have a lot of choices in the menu. I only saw three or four soup base choices, including beef soup, sukiyaki, and chicken ginseng. Each dinner combo includes a bowl of rice, choice of tuna sashimi salad or seaweed salad, and one plate of vegetables. The portion was pretty small.

This is our food. 我們的食物上桌啦! 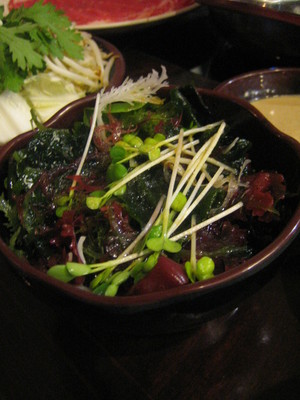 After we finished our dinner, we figured the rice and the sesame sauce were the best food there! Well, there really isn’t anything special about shabu shabu. They cut the meat for you and washed the vegetable for you. The customers cook all of the food by themselves. So most of the shabu shabu places are essentially the same, unless they have superb soup base or lots of selections.

Their beef seemed pretty fresh, evne though it was slightly too thin. The beef soup base was basically boiling water with a piece of seaweed inside. Not much flavor at all. The seaweed salad wasn’t too bad. My favoirte was the yummy sesame sauce, which tasted really good with the rice.

Will I recommend this restaurant? Well, I would rather drive farther to eat at the all-you-can eat shabu shabu place in Little Tokyo, or go eat at those wonderful Taiwanese hot pot restaurants. I would only come back to this palce if I am lazy and don’t feel like driving too far.