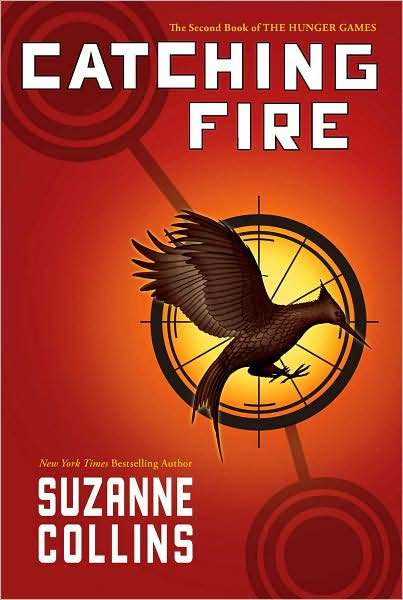 “Catching Fire” is the second book of the Hunger Game series. After reading the first Hunger Game book, I couldn’t wait to get my hands on the second book and try to find out what happen next. Thank goodness it didn’t take long before I get my copy from the long wait list from our local library. (One of the perks of working in a library 😉

Picking up the story in Catching Fire, Katniss’s victory has changed her life. She now lives in a mansion in the “Victor’s Village” of District 12, and has more money than she will ever need: her days of poverty and hunger are over. However, despite her new wealth, all is not well. As a victor, Katniss must now be involved with the violent Hunger Games (which she would rather forget) indefinitely. Most immediately, she must participate in a Victory Tour, visiting the Districts and families of the other Hunger Games contestants—“tributes”—who were killed in the arena, some of them at her hand. Then, she, Peeta, and Haymitch Abernathy—the alcoholic victor of the 50th Hunger Games, who mentored Katniss and Peeta during their time in the arena—will be required to act as mentors to the District 12 tributes at the 75th Hunger Games. That round of the Games has been deemed a “Quarter Quell,” i.e., an especially brutal version of the Games to commemorate its 75th anniversary.

In addition to the distasteful requirement that Katniss continue to be involved in the Hunger Games, she, her family, and her friends are in personal danger. Apparently Katniss’s rebellious act with the berries has stirred the possibility of insurrection in the Districts: if a 16-year-old girl can defy the Capitol and survive, why not entire Districts? President Snow—the cruel dictator of Panem—has personally threatened Katniss that unless she can pacify the Districts on the Victory Tour, she and those close to her will be in danger. The only way for her to obey this order is to continue feigning love for Peeta on the Victory Tour, and thereby to convince the restless Districts that the berries represented desperate love for Peeta and not rebellion. This project is, of course, excruciating since it is sure to further alienate her long-time hunting partner, friend, and would-be suitor Gale Hawthorne.

The first part of this book spends a lot of chapters describing how Katniss’ life has changed dramatically after winning the Hunger Game, how she adjusted to this new lifestyle, and how her relationships changed with Gale and Peeta. The author actually didn’t spend too much time describing the Quarter Quell game before it ended abruptly. This book also leaves the readers the biggest cliffhanger at the end. I’m dying to know what happens next and can’t wait to read the 3rd book.

I guess Suzanne Collins has done a tremendous job keeping us readers hanging on the edge of our seats with her exciting story and vivid descriptions of all the actions taken place in the arena. Every chapter gives a surprise ending that leads to the beginning to next chapter. I simply couldn’t put the book down until I read through the end.

Now that there is a Hollywood production of this book going on, I can’t wait to see how the movie will portray the Panem nation. Jennifer Lawrence plays the role of Katniss Everdeen. She is a wonderful young actress and I was really impressed by her acting in “X-Men: First Class”. I’m sure she’ll be a radiant, strong and defiant Katniss on the big screen. Movie will be released next year. I can’t wait!